From Bat-Yam to Ramallah: Instead of removing the danger, the police shoot to kill :: Orly Noy 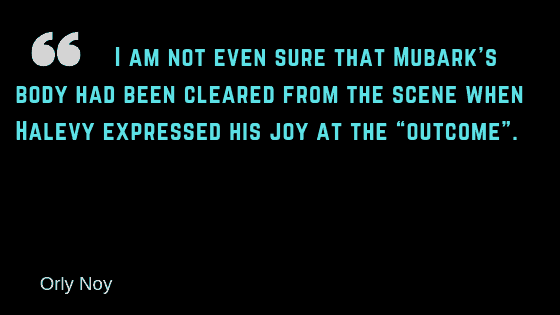 Only a short time before thousands gathered in Tel-Aviv to protest against police violence and profiling, the cops again did what they know best and shot to death a 16-year-old Palestinian girl holding a knife. There are some people for whom the rules of engagement do not apply.

A short time before thousands of protesters shut Tel Aviv down on 30 January for an angry demonstration following the murder of Yehuda Biadga, the Ethiopian- Israeli teenager who was shot to death by police whilst holding a knife, at another location, the Al Za’im checkpoint near Jerusalem, 16-year -old, Samah Mubark, from Ramallah, was shot to death by Border Police and Checkpoint security personnel. She too was holding a knife. Despite their similarities, and beyond the personal tragedy, both cases form part of the same trend, colloquially referred to as a loose “finger on the trigger but should more accurately called a license to kill.

Almost immediately following Mubark’s murder, even before an investigation had begun, the police were quick to issue a statement commending the conduct of the security forces. “To our surprise, a 16-year-old high-school girl, presumably coming from Ramallah, from the Valley region, emerged from a taxi, approached the security guards, drew a knife and attempted to stab them”. This is how the event was described by Major General Yoram Halevy, Jerusalem district commander, who arrived at the scene just following the murder. “The guards here, and the Border Police responded with fire, hit and neutralised her, and she died immediately”. He went on to compliment the shooters: “What we have here is a terrific response by the checkpoint police who acted in real time in such a way as to prevent a different outcome, and I am pleased with the outcome.”

I am not even sure that Mubark’s body had been cleared from the scene when Halevy expressed his joy at the “outcome”. What is clear is that when the district commander responds in such a manner and makes sure to commend the shooters, any investigation of the event that resulted in the murder of a 16-year-old girl – if such an investigation even takes place – will be merely paying lip service. In a nutshell, the only reference Halevy made to any future investigation was “we are of course looking at the background, what brought her there”. That is to say, the thought of investigating the conduct of the police does not occur to him. He has already awarded them decorations.

They key to understanding Halevy’s frame of mind is the word “neutralise”. Like many words that have been desecrateded in Israeli Newspeak, this word too has been abstracted from its original meaning – the capacity to prevent someone from causing harm -and has been taken up with natural ease in public discourse, to mean, quite simply, to execute. For Halevy, to neutralise and to kill become interchangeable: “She is neutralised, killed immediately”. So, if it is the job of checkpoint police to neutralise a threat, and if to neutralise means to kill, then it follows that the police indeed fulfilled their duty outstandingly, and that is the end of the story.

But the complete interchangeability between neutralising and killing is not a professional opinion, but a political one. In fact, the Police Department’s own code of conduct obliges security personnel to take a series of measures before they have no choice, as a last resort, to kill. Police are afforded several means to do so: Use of tasers, firing warning shots, aiming at the legs and several other methods. It is called Rules of Engagement, and I am pretty sure that Major General Halevy has heard of them. The claim that police officers armed to the teeth were unable to neutralise the threat posed by a 16-year old high-school girl holding a fruit knife, or a shell shocked and mentally ill Ethiopian, except through deadly fire is an absurd and cruel disgrace. But this is not the case.

Armed with the “commander’s code, which justifies and even obliges a priori the killing of any threatening or seen to be threatening person, the police have no need to refresh their memory regarding any Rules of Engagement. When the Minister for Public Security decrees that “any act of terror must end in the killing of the terrorist there and then”, that is, in an extra-judicial execution, or when prominent Opposition MK Yair Lapid says that “anyone who wields a knife or a screwdriver must be shot dead’ then the checkpoint police will not think twice before pulling the trigger. This policy is not only evidently illegal and morally criminal, but professionally dangerous. Instead of deploying trained and equipped officers who can provide genuine security for those they aim to protect, it generates a great deal of mistrust towards the Police force, which we saw being expressed yesterday in the streets of Tel-Aviv.

Whoever cannot see the connection between the murders of Samah Mubark and Yehuda Biadga would do well to consult the figures presented in these pages by Oren Ziv, who examined the number of deadly shootings of citizens by police during the past 5 years. Two shocking findings emerge from these figures:  The first is that despite the fact that during those years 14 citizens have been shot dead by the police, not a single inditement has been served against a single officer; The second relates to the identity of the victims: 9 Arabs, 3 Mizrahim and 1 Ethiopian – Yehuda Biadga.

You could say – Samah Mubark was not an Israeli citizen so her murder should not be included in this category. This claim doesn’t hold water for two main reasons:

Firstly, despite Israel’s murderous and abusive policies towards the Palestinians in the Occupied Territories, it is obliged according to International Law to protect the security of the native population living there. The second reason is that whoever thinks that the ‘”license to execute” policy stops at the Green Line and won’t creep into Israel proper, is either naive or delusionally playing dumb. Look again at the identity of victims of police killings and observe the food chain erected here by the Israeli hierarchy. Once the moral and legal restrictions are removed, we all become more exposed to violence committed by those in uniform – naturally to different degrees of risk.

Those who are rightly outraged by the murder of Yehuda Biadga in Bat-Yam, should also be outraged at the murder of Samah Mubark at Al Za’im checkpoint. Two youngsters who each in their own way became tragic victims of a rotten reality. Biagda, who returned shell shocked from his military service, and Mubark who had spent her entire life under the heavy boot of the very same military. One can understand the way her spirit was impacted by the continuous violent occupation from the things Rami Younis was told in the Balata refugee camp “there isn’t a single child here without mental issues”. The Occupation has indelible power to poison the souls of young people on both sides of gun barrel.

If we took to the streets en masse following every preventable police shooting, demand that the police are held accountable, insist that an effective investigation is opened and that when necessary, those responsible face justice, then perhaps the officer who shot Biadga would have thought twice before pulling the trigger. This might be a worthier cause even more than the insatiable thirst for vengeance against the Palestinian population.

Originally published in Hebrew on Local Call. Read it here