The Jewish Fear and the Palestinian Struggle :: Samah Sabawi 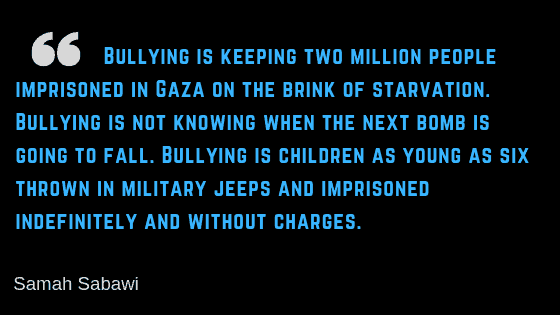 Australian singer/song writer Deborah Conway in a recent interview was asked why her support for Zionism increased. ‘I hate bullies and I feel the world is bullying Israel’ she replied adding that the Palestinian-led BDS (Boycotts Divestments and Sanctions) movement to end Israel’s occupation and ongoing human rights violations is ‘horrendous antisemitism.’

For years, I was a member of Potlucks for Peace, a Jewish-Arab dialogue group in Canada. One afternoon, we gathered with our competing hummus, couscous and fattoush salads to discuss the topic of the day: the Jewish fear. Jewish members of the group spoke of personal and collective experiences of growing up in the shadow of the Holocaust. I listened with my ears and wept with my heart. What they and their families experienced was unimaginable horror that seemed to continue to haunt them and riddle them with insecurity and fear. Afterwards, the discussion was centred on the way this Jewish fear compels many in the Diaspora to lend their support to Israel, a state that they feel offers them a sense of security. Their support for Israel is often blind and unequivocal. Israel can do no wrong.

I thought of this as I read Ms. Conway’s interview and reflected on her family history and her connections to the Holocaust. Could the Jewish fear explain in any way her skewed vision of reality? Is it that much easier to repeat Israel’s talking points about being ‘bullied’ regardless of the facts, than to face the reality that a state that makes her feel secure as a Jew living in Melbourne, is one that is responsible for stripping millions of Palestinians their right to security, human rights and freedom?

Does Ms. Conway not see that bullying is when you make an entire population invisible, propagating the claim of a land without a people for a people without a land? Bullying is wiping out more than four hundred Palestinian villages and towns, forcing two thirds of the Palestinian population into exile, denying them the right to compensation or return.

Bullying is systematic discrimination that gives all rights and privileges to Jewish citizens and institutes more than 52 laws that discriminate against non-Jewish Palestinian citizens, most recently passing theNation-state bill, defining Israel as a national homeland of the Jewish people, at the determined of the civil rights and liberties of its non-Jewish citizens.

Bullying is when the army responds to mostly unarmed Palestinian protesters with lethal force. According the to the UN, in 2018, 295 Palestinians were killed and 29,000 injured as Israeli forces practiced its open-fire policy. A policy sanctioned by Israel’s government, and backed by its judicial system. Bullying is denying Palestinians building permits, then forcing them to demolish their homes, this is mostly to make way for Jewish only settlements, roads and homes to be built.  Bullying is uprooting Palestinian olive trees, Oxfam estimates since 1967, 800,000 olive trees have been uprooted by Israel, forcing Palestinian families who are economically reliant on the olive harvest to lose $12.3m each year.

Bullying is keeping two million people imprisoned in Gaza on the brink of starvation. Bullying is not knowing when the next bomb is going to fall. Bullying is children as young as six thrown in military jeeps and imprisoned indefinitely and without charges. Bullying is humiliation at checkpoints, tear gas on the way to school, hospitals running with no power, sewage water in your sea, pharmacies with no medicines, winters with no heat, and overseas scholarships wasted because students are not allowed to leave. Bullying is calling the resistance to all of these violations ‘horrendous anti-Semitism’.

Boycotts are legitimate effective and popular non-violent tactics that are used around the world to end corporate and governmental unethical and inhumane practices. The Palestinian BDS is modelled on the South African struggle to end apartheid. It has the support of the majority of Palestinian Civil Society groups and notable human rights advocates around the world, including Archbishop Desmond Tutu, Naomi Klein, Roger Waters, Angela Davis and countless more. Palestinians th
rough the BDS stand in solidarity with many other civil rights struggles against all forms of racism, including antisemitism. This year, forty international Jewish social justice organisations recognised that the BDS movement has a proven commitment to “fighting antisemitism and all forms of racism and bigotry.”

I understand the great pain and fear within the Jewish experience, and that many in the Jewish Diaspora rely on Israel to feel safe. But why should the Palestinians be expected to pay the price for this with their lives and freedoms? Why should this be a zero sum game? Our people, Palestinians and Jews, have suffered enough. We must progress beyond our fear and trauma in order to create a future in Israel/Palestine where all peoples – Israeli and Palestinians alike – can actually besafe. The Palestinians, through the BDS movement, are calling for an ethical decolonisation and a reconciliation in Israel/Palestine based on justice and equal human dignity for all. They are asking the world to support their aspiration to co-exist with the Jewish people as equals on their ancestral land.

Samah Sabawi is a Melbourne based multi-award winning author, playwright and poet. Samah will be appearing in an upcoming forum on the Boycott, Divestment, Sanctions campaign hosted by the Australian Jewish Democratic Society.