South Australia's push to be the world's nuclear waste dump

The South Australian Nuclear Fuel Cycle Royal Commission released its report in May. Its main recommendation was to consider turning SA into the world’s nuclear waste dump by importing 138,000 tonnes of high level nuclear waste and 390,000 cubic metres of intermediate level nuclear waste.
How much money might be made by taking nuclear waste from other countries? There is no precedent to base an estimate on. There is a great deal of uncertainty about potential revenue, and it is far from certain that revenue would exceed the Royal Commission’s $145 billion estimate of the costs associated with the project. The economic case presented by the Royal Commission was strongly challenged by economist Prof. Richard Blandy, by The Australia Institute and others. Yet those critiques were ignored by the Royal Commission and by the state government.
The Royal Commission glossed over major contradictions in its proposal. For example the assumption is that high level nuclear waste will first be imported for storage to accrue funds to build a deep underground repository. But what if efforts to establish a repository come to nothing ‒ as they have in many other countries? South Australia will be stuck with thousands of tonnes of nuclear waste, most likely on the Eyre Peninsula or the west coast, with no capacity to dispose of it and no return-to-sender clause.
The Royal Commission glosses over the fact that Australia has not yet been able to find a disposal site for our own relatively small stockpiles of low and intermediate level waste. Attempts to impose a national nuclear waste dump in SA by the Howard government failed. Later attempts to impose a dump in the NT failed. And the current attempt to impose a national dump in the Flinders Ranges is being fiercely opposed and will almost certainly fail.
So the proposition is that we should attempt storage and disposal of high level nuclear waste even though attempts to manage low and intermediate level waste have as yet been unsuccessful. And the proposition is that we should attempt storage and disposal of vast amounts of foreign waste even though we have not yet found a solution for Australia’s much smaller stockpile of radioactive waste. Those propositions are reckless and irresponsible.
The public health and environmental risks are profound. Professor John Veevers from Macquarie University wrote in Australian Geologist about the risks associated with a high level nuclear waste repository: “Tonnes of enormously dangerous radioactive waste in the northern hemisphere, 20,000 kms from its destined dump in Australia where it must remain intact for at least 10,000 years. These magnitudes − of tonnage, lethality, distance of transport, and time − entail great inherent risk.”
It should be noted that no country has completed construction of a deep underground repository for high level nuclear waste. There is one deep underground repository for intermediate level nuclear waste ‒ the Waste Isolation Pilot Plant (WIPP) in the USA ‒ but it has been closed since February 2014 due to a chemical explosion in one of the underground nuclear waste barrels. A U.S. government report details the many failings of the operator and the regulator that caused the WIPP accident.
The Royal Commission had little or nothing to say about other problems overseas, e.g. fires at radioactive waste repositories, the current project to exhume 126,000 waste barrels from a dump in Germany following extensive water infiltration and corrosion, the liquid nuclear waste explosion at Mayak in the USSR, and many others.
Separately, the federal government is also trying to establish a nuclear waste dump in SA ‒ this one for national nuclear waste, much of it from the nuclear research reactor site at Lucas Heights, south of Sydney. 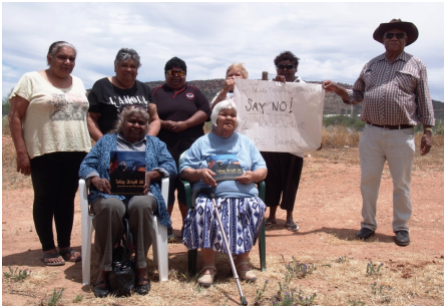 The federal government has identified a site near Hawker in South Australia’s Flinders Ranges. The site was nominated by former Liberal Senator Grant Chapman but he has precious little connection to the land. Conversely, the land has been precious to Adnyamathanha Traditional Owners for millennia. The fact that the government is once again targeting a ‘remote’ Aboriginal site ‒ following previous, failed attempts to impose a dump on the land of Aboriginal people in SA and the NT ‒ is beyond comprehension and creates a lot of frustration and hurt. Regina McKenzie, an Adnyamathanha elder living at Yappala station, just kilometres away from the proposed site, says that the proposal is “an attack on our cultural beliefs, history and heritage.”
McKenzie explains: “Adnyamathanha Traditional Owners weren’t consulted about the nomination. Even Traditional Owners who live next to the proposed dump site at Yappala Station weren’t consulted. The proposed dump site is adjacent to the Yappala Indigenous Protected Area. On the land with the proposed dump site, we have been working for many years to register heritage sites with the SA government. The area is Adnyamathanha land. It is Arngurla Yarta (spiritual land). The proposed dump site has countless thousands of Aboriginal artefacts. Our ancestors are buried there. The nominated site is a significant women’s site. Throughout the area are registered cultural heritage sites and places of huge importance to our people.”
The site is subject to earthquakes and tremors, at least half a dozen times each year. And although it seems like desert to the unknowing eye, it is flood land. The water comes from the hills and floods the plains, including the proposed dump site. The last flood in 2006 uprooted massive trees in the area, while an earlier flood destroyed an entire township.
Regina McKenzie, in the name of the Adnyamathanya people, calls on “all South Australians − all Australians − to support us in our struggle” and she states that “Adnyamathanha Traditional Owners will fight the proposal for a nuclear waste dump on our land for as long as it takes to stop it.”
So what should be done with Australia’s radioactive waste? Around 95 percent is securely stored at two Commonwealth sites – Defence Department land in SA, and the Lucas Heights site south of Sydney. It is by no means clear that any waste needs to be moved, and there certainly isn’t any urgency. A number of organisations calls for an independent investigation into all possible options since years; being rigorously ignored by the government which keeps pursuing its central remote dump preferred option.
Dr. Jim Green is the national nuclear campaigner with Friends of the Earth, Australia.
This post is part of Just Voices #11 – Climate Change.