Moral failure in the Jewish community 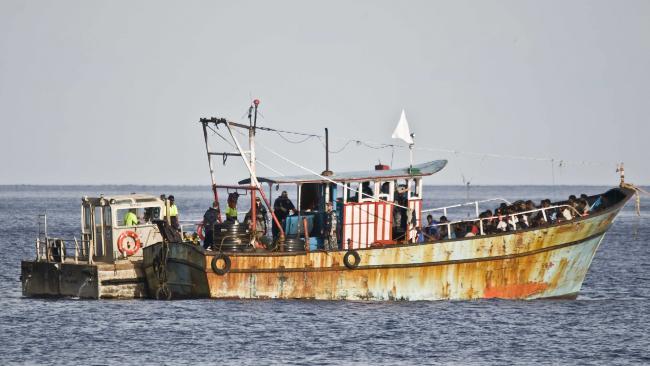 An entirely personal perspective by Larry Stillman
There is some strange politics going on in the Jewish community showing tunnel vision and a lack of moral fibre. [for an update on AIJAC’s position, see below.]
The AJDS has expressed its repugnance at the Rudd Government’s decision to push refugees who arrive by boat to an unsure future in a corrupt and unstable country—New Guinea—thus washing its hands of domestic responsibility for a problem which by international standards, is minor.
But just as much, we should be repelled by the weak response of the ECAJ to dog-whistle politics, in which it refuses in its public statement to take any moral position because there are “too many unknowns” and the organisation is waiting until the end of the month for more information.  It has claimed that its statement is the consensus statement of 30 or more Jewish leaders which is even more outrageous. So much for a lobby group that has professional staff,  and some push in Canberra.
And then we have the response of the NSW Rabbinical Council which stated that “RCNSW does not see how the resettling of genuine refugees in a country such as PNG would be a violation of the Biblical injunction to save lives.It is incomparable to Holocaust victims who were refused entry everywhere and callously returned to certain death because no option for third country processing existed.”
It is inappropriate to use the Shoah as the point of reference for contemporary humanitarian problems because this sets the bar too high ( i.e. clear genocide). There are more reasons for being a refugee than genocide. It is also not a question of who is a genuine refugee for nearly everyone who arrives is classified as a refugee.
It is a weak statement in comparison to that coming from their colleagues in Victoria and a clear moral failure on their part.  The Rabbinical Council of Victoria has had the foresight to be unequivocal and state that “it views with grave concern the latest government policy, that denies asylum-seekers entering Australia illegally, by boat, any possibility of settling in Australia”.
Neither the ECAJ or the RCNSW appear to have any awareness of the numerous recommendations made by the Expert Panel on Asylum Seekers or the UNHCR for the appropriate treatment and processing of asylum seekers, nor to they even refer to the obvious importance of a regional solution.   These are not matters about which one has to be an expert–they have been well-covered in the media, which one assumes even the ECAJ membership and most rabbis read on a daily basis.
The RCV should be commended for its humanity on this matter and the ECAJ and the RCNSW apologize or tender a few resignations.
What more is there to be known about the state of affairs in New Guinea, the jailing of children in this country under the guise of detention, years of failure in the humane treatment of refugees in detention centres, the outbreak of blatant racist rhetoric or Australia’s niggardly legalistic approach?
If Jewish refugees were to be sent to Manus Island and a failed state with no chance of entering Australia, what would the response of the ECAJ or the NSW rabbis be? I suggest something very different.
Australia’s refugee problems are miniscule compared to that in the rest of the world, yet many “leaders” in the Jewish community are behaving as if the security and wealth of Australia is at risk. It is not, but its integrity is.
[PM Thursday–The Australian Jewish Affairs Council has said:
“AIJAC strongly believes in a non-discriminatory, generous and compassionate Australian policy on asylum-seekers but also that these objectives must be balanced, and indeed would be enhanced, by maintaining an orderly and fair process, effectively addressing Australia’s genuine border security concerns, and above all, by dramatically reducing the incentives which cause people to place their lives at severe risk in unseaworthy boats supplied by the illegal people-smuggling industry.
This is admittedly a complex task, but any policy which means that people with a genuine and well-founded fear of persecution in their homeland who arrive here have absolutely no prospect of ever being resettled in Australia is unacceptable.”
This puts the AJDS and the AIJAC teams on the same side as the Victorian rabbinate… One rubs one’s eyes in disbelief.]