By Bonnie Gelman.
‘Fracking’ is an abbreviation of a process of coal seam gas extraction called ‘hydraulic fracturing’. Gas extracted in this way is known as ‘unconventional gas’. Fracking involves pumping a mixture of water, sand and chemicals into rock at high pressure. The rock fractures and gas (or oil) is forced out. There are many issues relating to fracking; there are multinational companies putting pressure on governments to allow for the process. It is said that  increasing reliance on natural gas, rather than coal, is creating widespread public health benefits, as the burning of natural gas produces fewer harmful particles in the air. Also claimed is that nitrogen oxide and sulfur dioxide emissions have been reduced dramatically at the power plant level, with natural gas producing only somewhere between 44 and 50 percent of the greenhouse gas emissions compared with burning of coal. But air quality dynamics around fracking operations are not fully understood, and cumulative health impacts of fracking for nearby residents and workers remain largely unknown.
There may be also be under-appreciated problems with air quality, particularly relating to ozone. Natural gas is not a purely clean and renewable source of energy, and so its benefits are only relative.
The embrace of cheap natural gas will undercut incentives to invest in solar, wind, and other renewables.
Another major study, published in the Proceedings of the National Academy of Sciences, confirmed that high-volume hydraulic fracturing techniques can contaminate drinking water 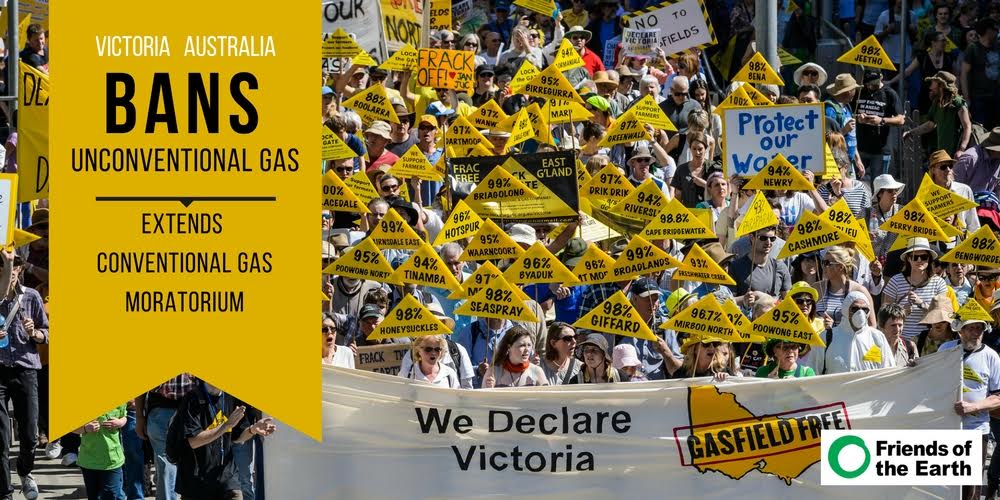 A win in Victoria.

Another issue with respect to water is that fracking is hugely water-intensive; wells can require anywhere from 8 to 75 million litres of water, with another 25 percent used for operations such as drilling and extraction. So fracking can impact local water sources, both with respect to aquifers being contaminated, and / or not being as available for use as potable water.If you are interested in reading more, there is 2014 literature review published in Annual Reviews of Environment and Resources titled “The Environmental Costs and Benefits of Fracking,” authored by researchers affiliated with leading universities and research organizations who reviewed more than 160 studies.
Friends Of The Earth (http://www.foe.org.au/) and Friends Of The Earth Melbourne (http://www.foe.org.au/) is an excellent social and environmental organisation which is working hard to ensure that renewable energy is the focus of energy production. Friends Of The Earth and Lock The Gate farmers and activists have worked hard to stop fracking in Victoria. That the Andrews Government extended the ban on fracking in Victoria is good news after a state parliamentary inquiry into the issue received more submissions than any in recent memory, almost all against.