On September 4, 2016, the AJDS held the Decolonisation Forum: From Australia to Israel-Palestine. The event took place at the Multicultural Hub and was well attended, drawing together an eclectic crowd that had gathered to hear our esteemed panelists: Dr. Gary Foley, Dr. Clare Land, and Dr. Sary Zananiri. An additional presentation was delivered electronically by Nina Grunzwieg from Zochrot. The event was chaired by Dr. Jordy Silverstein, who acknowledged our presence on Wurundjeri land and encouraged people to think about what that means. All proceeds from the nights were donated to Warriors of Aboriginal Resistance (WAR) and we managed to raise $800 to help support Indigenous rights. 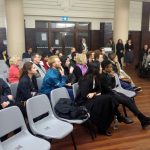 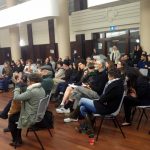 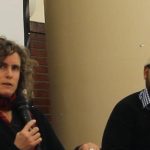 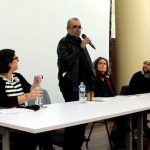 Dr. Gary Foley is a Gumbainggir man who has been at the centre of political organising for Aboriginal rights since the 1970s as a writer, educator, researcher, museum curator and actor, and currently a History Professor at Victoria University. With a PhD in History, Foley has helped set up Sydney’s Aboriginal Legal Service and Aboriginal Medical Service, as well as the Aboriginal medical service in Melbourne. In 1971 he was a key organiser of demonstrations against the Springbok tour. He also co-founded the Aboriginal Tent Embassy in Canberra. Since then Gary Foley has led Aboriginal protests, including at the Commonwealth games and Australia’s bicentenary, been a consultant to the Royal Commission into Black Deaths in Custody and been instrumental in educating non-Indigenous people about colonisation and Aboriginal rights.
Foley began by asking the audience to imagine what a decolonised Australia might look like. It would be a place in which self-determination for Indigenous Australians was possible and encouraged. He talked at length about the influence that Colin Tatz’ work has had on him in understanding the relationship between Jewish Australians and the Indigenous solidarity movement. Apologizing for his ill health, Foley was unable to stay for Q&A time.
Dr. Clare Land is a non-Aboriginal activist and researcher who has been involved in supporting Aboriginal land rights struggles in southeast Australia since 1998. Completing her PhD at Melbourne Uni and receiving the 2013 Isi Leibler Prize, Land continued to publish her research in the book Decolonizing Solidarity: Dilemmas and directions for supporters of Indigenous struggles (2015). In it she examines the spaces between Aboriginal aspirations and non-Aboriginal supporters, outlining the ways in which non-Indigenous allies can adopt a more critical political framework which places their lives in relation to ongoing colonisation.
In her talk, Land discussed her book’s structure and the different approaches to the concept of solidarity explored therein. It was fitting to have this contrasting perspective on race relations, privilege and recognition as they play out within the activist movement, especially since Jewish activists fall into a somewhat awkward position in relation to Aboriginal Australians. Aussie Jews represent on one hand the colonisers, but also occupy a minority space in Australian national culture. As Jews, when we come to support Aboriginal Australians in their struggle for decolonisation, we must acknowledge our role in this matrix of power, benefiting as we do from our ostensible Whiteness.
This awkward subjectivity was immediately acknowledged by Dr. Sary Zananiri, an Australian-Palestinian artist and academic, who delivered a visual presentation about picturing Palestine, the biblicalising of its landscape and projected nationalities. Having completed his PhD in Fine Arts at Monash University looking at the evolving representations of the Palestinian landscape, Sary has continued to examine the colonial processes embedded in the imaging of Palestine. He has exhibited his work both in Australia and internationally. In 2013 he exhibited Pines, Panoramas and Palestine: three proposals for reading the past as his PhD examination at MADA Gallery. More recently he showed Unpicking Jerusalem: a re-examination of the archives at Little Woods Gallery (read more about it here) and was shortlisted for the National Emerging Art Glass Prize at the Wagga Wagga Glass Museum in 2016. He is currently a co-director of the Palestinian Film Festival in Australia and lectures in the Glass Studio at Monash University.
Zananiri began his presentation by emphasising the curious discomfort of being a Palestinian Australian – borne to a legacy of the Nakba and its exile, and yet embodying the colonising power here, in Australia, as a non Aboriginal person. He presented a series of images from Palestine around the turn of the 20th century, and discussed the subtle manipulations of the artists and the ways in which these created and disseminated ideas about Palestinian life prior and during colonisation. By critically examining the different images, Zananiri demonstrated what a de-colonising gaze might achieve in terms of looking ahead into our joint futures as Australian activists – Jewish, Palestinian, Indigenous, or otherwise.
Zochrot‘s Nina Grunzwieg delivered her presentation electronically, covering in detail the work of her organisation. This Israeli NGO has been active since 2002 in raising awareness and promoting justice for the victims of the Nakba, the occupation of Palestine and ensuing devastation culminating in 1948.
There were some challenging questions from the audience, regarding the validity of Palestinian return and of the use of the term Nakba. Other questions addressed to Gary Foley (in his absence) shed light on the deep fissures within the Indigenous community and the contentious issue of intervention. It was evident that more discussion could and should be had, and the audience was engaged by the themes raised by the panelists. The main value of the night was indeed in offering the opportunity to consider and compare various aspects of decolonisation: re-examining ideas of nationhood, of return, reparation, critical action and more. Importantly, there is great benefit in considering the ways in which these notions carry over from one locale and culture to another, in our globalised and localised struggles.
We did record the event but the sound quality in the auditorium was not great. The AJDS is a non-profit organisation that operates solely through donations. If you would like to donate money towards recording equipment, visit this page or write to [email protected] to support our work.