Anti-Defamation Commission attack on Judth Butler –what is the motive? 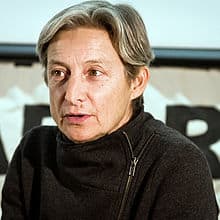 Can any one explain to me why the Anti Defamation Commission is running material from FrontPage Mag in its self-proclaimed email news bulletins dedicated to combating racism and anti-Semitism.  In this case,  the article is an attack upon the critic Judith Butler (“The BDS Nazis are back in Berlin’) for doing everything short of eating babies. Now, you may or may not like Butler’s stance on BDS, but she is certainly not anti-Semitic, but rather engaged in that  obscure post-modern way, as a  feminist queer cultural critic.
FrontPage is well recognised as a major source of anti-Muslim (and African American) commentary, raving about left conspiracies and incitement from the pen of David Horowitz and others of that ilk.  Horowitz (and Daniel Pipes, who also gets free trips to spruik his line in Australia) have been donors to the campaign of Geert Wilders “the virulent anti-Muslim Dutch politician” (Mondoweiss).  Remember– Wilders is also beloved of Cory Bernardi and the QSociety in Australia and his visa application is being considered by the government.    The links to loonies go on and on and on.
I find it hard to think that the ADC are running this stuff without any qualification without a more malign purpose at hand.  It has no obligation to provide in its bulletins unqualified links to racist hate-mongering websites like FrontPage Mag.  It seems to be part of a pattern of publishing material from here there and everywhere to prove an academic conspiracy against Israel.
Larry Stillman