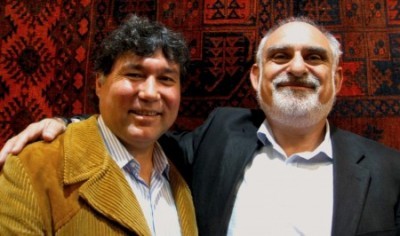 By Dennis Martin
“Salaam aliekum”.
“Shalom aleichem”.
A hug, a laugh and so we greet each other. Me, a Jew using the Muslim greeting and Najaf Mazari, a Muslim using the Hebrew greeting. And so it has been on most Saturday afternoons for the past 4 years. We sit in Najaf’s rug shop in Prahran, drinking black Afghan tea and chewing the fat; family, health, religion and politics but as yet not sport. I don’t think Najaf knows who Sir Donald Bradman was or who Shane Warne is. We agree on many things, disagree on others, often strongly. But friends can argue and remain friends. And we talk rugs: hand knotted oriental rugs and particularly Afghan rugs. It is shared interest in rugs that bought us together. Many years ago I also traded in rugs (in a small way).
“I did not know that I could feel this much sorrow without a body to bury”.
When I read these words, the opening lines of Najaf Mazari’s acclaimed biography “The Rug Maker of Mazar-E-Sharif” (co-written with Robert Hillman) I was moved by this simple statement of despair experienced by a “boat person” being held in the Woomera Detention Centre. How did it come to this? A simple village boy, shepherd and master rug maker behind barbed wire, thousands of kilometres from his home, family, culture and familiar landscape.
As one of the many victims of Taliban atrocities Najaf was forced to flee for his life. Members of his immediate family had been killed and he himself was detained and beaten. A long difficult journey through Iran, Pakistan and Indonesia and finally to Australia on a flimsy Indonesian fishing boat leaving behind his wife Hakeema and a baby daughter Maria in a refugee camp in Pakistan. A separation that lasted over five years before a final reunion in Australia with his loved wife, and a child who did not even recognize her father.
Since first meeting Najaf at the launch of his book “The Rug Maker of Mazar-E-Sharif,” I have come to know his family well, eating in their home and having them as guests in mine. I have watched Maria grow from a child into a young woman, an Australian young woman, proud and secure in her Hazara identity. And I have constantly been struck by Hakeema’s infectious sense of joy and her hospitality.
I have also watched as Najaf carved out a niche in Australia for himself and his family. As a businessman, frequent speaker at schools, conferences and writers’ festivals, an advocate for the Australian Hazara community and an unofficial social worker helping newly arrived refugees find their feet in a foreign environment. Finally, Najaf is also a charity worker that raises funds for health and education services for both boys and girls in his home village. Hopefully, it is through support like this from the diaspora that change will come slowly to Afghanistan in a way that military intervention has failed to achieve.
Whenever I hear the anti-refugee outpourings of the opportunistic, the fearful, the ignorant, the resentful and the unabashedly racist, I think of Najaf and his family. I hear more of these poisonous words with every passing day as politicians try to glean a few extra votes by playing the refugee card in the up-coming elections willingly abetted by the Islamophobes, white Australians and other hatemongers. I also think how lucky is Australia to have gained Najaf and his family as citizens of this country and how lucky I am to have acquired such a friend.