8 Resources to answer the question: how can I support Indigenous solidarity & allyship? 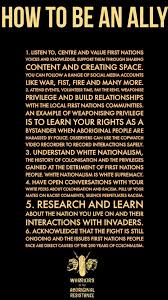 Excerpts from various writings on solidarity and allyship and resources.

The thinking and learning of many community members and activists about how to work in support of Aboriginal struggles has gone into this book, and is crucial reading for anyone interested in decolonisation and allyship.
Appendices and other resources are available on the Decolonising Solidarity website:

2. ZINE: ‘Everyone calls themselves an ally until it is time to do some really ally shit’ || Xolpakelxhit from ancestral pride.

“Every single time we speak publicly, or put ourselves out there, we are always asked by other Indigenous Nations, settlers, and settlers of color:  what can we do?
We then go on to outline all the ways those who want to be potential allies can help us out in a tangible way, in a targeted way, and in a general way. Everyone takes notes, asks more questions, and seems really earnest. Then inevitably soon after something happens that we need to utilize these tools and reach out to our settler allies, guess what happens?! Not much”

In depth interviews with a number of non-Indigenous allies/supporters of Indigenous justice in New Zealand/Aotearoa and Australia.  Honest reflections, and insights from years of solidarity work covering a range of focal points, from language revival to the Barmah-Millewa campaign in North West Victoria.

”This question is often asked, but seldom answered, partly because it is the wrong questions focused on the wrong people.  We do not have an “Aboriginal problem”.  This is NOT an issue about Aboriginal people.  The issues here is not what we can do for “them”; it is about what we need to do to redeem ourselves, of the brutality of our past and present relationship with indigenous people.  The question ought to be “what are Indigenous people owed?” and must be asked of non-Indigenous people”

“This provocation is intended to intervene in some of the current tensions around solidarity/support work as the current trajectories are counter-liberatory from my perspective”
“The commodification and exploitation of allyship is a growing trend in the activism industry.”
“Ally has also become an identity, disembodied from any real mutual understanding of support.  The term ally has been rendered ineffective and meaningless.”
“Allies all too often carry romantic notions of oppressed folks they wish to “help.”  These are the ally “saviours” who see victims and tokens instead of people… Guilt is also a primary ally motivating factor.  Even if never admitted, guilt & shame generally function as motivators in the consciousness of an oppressor who realizes that they are operating on the wrong side.  While guilt and shame are very powerful emotions, think about what your doing before you make another community’s struggle into your therapy session.”

7. ZINE: When being an ally turns into being an appropriator || Xolpakelxhit from ancestral pride.

“Settler Self Check:
-If you are part of an action that involves Indigenous people or communities, do you plan to stick around event after the confrontation/conflict/escalation has happened?  How can you support long-term and what are people asking for?
-In a situation where police or other “authorities” are involved, are you acting in a way that might bring more heat and violence down on Indigenous people?…
-What are the privileges you have?  How can you use those strategically? Are you wasting your privileges by denying them?”

8. A critique of Ally politics, excerpt from ‘Taking Sides: Revolutionary Solidarity and the Poverty of Liberalism.’ 2015

“This writing takes apart the concept of ‘ally’ in political work with a focus on race, thought clearly there are parallels across other experiences of identity.”
“The solidarity model also dispels the idea of one inside and one outside, foregrounding how individuals belong to multiple groups and groups overlap with one another… The charity and ally models, on the other hand, are so strongly rooted in the ideas of I and the other that they force people into distinct groups with preordained relationships to one another.”
“For a liberating understanding of privilege, each of us must learn our stake in toppling those systems of power, recognizing how much we all have to gain in overturning every hierarchy of oppression.”
“Oppression runs along countless axes, and the subtleties of our experiences are irreducible.”
“There is no singular mass of black people, latino folks, or “people of color” to take guidance from, and that people within a single identity not only disagree with each other but also often have directly conflicting desires and politics…In seeking oppressed groups to take directions from, white folks often end up tokenizing a specific group whose politics most match their own…This approach to dismantling racism structurally reinforces the hierarchical power that we’re fighting against by asking a small group to represent the views of an entire category of people with radically different lived experiences.”
“..and the goal of opposing oppression morphs into a strange political competition in which we valorize oppressed identities to such an extent that people strive to be identified as oppressed, or at least to be allied with the “most oppressed.””
“It is essential to understand how systematic forms of oppression shape us, but the point is to collectively dismantle those privileges.  Individual transformation can only happen concurrently, not prior to this.”

Further resources:
Unsettling America: https://unsettlingamerica.wordpress.com/allyship/
Zochrot– http://zochrot.org/ Zochrot is an Israeli NGO working on decolonisation, accountability for the Nakba, and the right of return for Palestinian refugees.

Indigenousx is an independent Indigenous media platform celebrating Indigenous Excellence and Diversity and striving to amplify Indigenous voices across Australia and beyond.
https://indigenousx.com.au/
Allies decolonising on facebook.

This article appeared in our Just Voices magazine (issue 15, 2018) on Decolonisation and Indigenous Solidarity.