Statement about the women's boat to Gaza 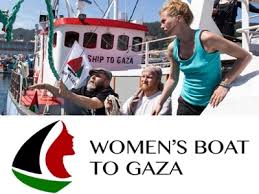 On October 5th 2016 13 pro-Palestine activists on board the ship Zaytouna-Oliva of the Women’s Boat to Gaza were stopped by the Israeli army in international waters and then detained and deported.   We send our support and solidarity to the women who sailed on the ship for their courage and commitment to bring attention to the dire situation in Gaza, which has been under an Israeli led blockade since 2007.

While the women on board the ship have now been released, the blockade of Gaza remains, leaving 1.9 million Palestinians effectively imprisoned.  Due to Israeli military measures, about one-third of Gaza’s arable land and 85 percent of its fishing waters are totally or partially inaccessible (Olivier De Schutter, UN special rapporteur).  Last year, a United Nations report predicted that Gaza could become uninhabitable by 2020.  More than 70% of the population relies on humanitarian aid, 47% of the population suffer from food insecurity, and 95% of the tap water is unsafe for drinking.  The legality of the blockade has been disputed, with independent UN panels asserting it to be unlawful under international law as it constitutes collective punishment.

The captain of the Women’s Boat to Gaza was a woman from Hobart, Madeleine Habib.  Speaking on her involvement in the ship to Gaza, Ms Habib said: “Once you’ve been there and you understand the suffering and humiliation and the slow wasting away of a culture and of the people, it’s only then that you realise it’s something we need to stand together to stop.”

We call on Australian Foreign Minister Julie Bishop to condemn Israel’s policies of occupation and to support steps to lifting the blockade on Gaza in recognising the principles of Palestinian self-determination.  We also call for measures to be taken to ensure that all parties adhere to ceasefire conditions and that the easing of the blockade on Gaza is met with the cessation of rockets fired into Israel.  There can be no peaceful solution while Israel and Egypt maintain their blockades leading to the siege of Gaza which is producing unlivable conditions for Palestinians in Gaza.

This statement was issued by the AJDS Executive Committee October 17, 2016