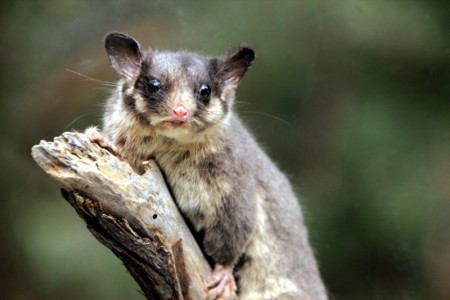 By Danya Jacobs
Victoria’s faunal emblem, the Leadbeater’s possum, was thought to be extinct until the tiny marsupial was rediscovered in 1961 in the giant Mountain Ash forests that encircle Melbourne’s eastern suburbs and blanket the Yarra and Thompson river catchments.
These forests, often referred to as the Central Highlands, are also home to the tallest ever-recorded trees in Australia. The Ferguson Tree was measured at some 132 meters in 1871 on the forest floor at Watts River, a tributary of the Yarra near Healesville.  The tallest living tree in the world today is a Californian Coastal Redwood that stands at 115 meters. In Australia, our tallest living tree is Centurion, a Mountain Ash in Tasmania’s Southern forests measuring 100m.
Today, the once impenetrable, majestic forests of the Central Highlands, where entire valleys of giant Mountain Ash once towered over a rich understorey of tree ferns and rainforest species, are dominated by a patchwork of square-blocks – even-aged Mountain Ash trees between 0 and 40 years old, evenly spaced, with little understorey.  This is a forest subject to an intensive clearfell logging regime and one you could easily mistake for a plantation.
Logging is now called “timber harvesting” and the forest looks like a crop – hyper-managed to produce a single species for human consumption.  Only about 2% of Victoria’s Old Growth Mountain Ash forests remain, fragmented into small pockets. But there are bigger, beautiful tracts of old forest that recovered from the 1939 bushfires and that now form critical habitat and stunning ecosystems, though perhaps not for much longer.
Logging is not only destroying the forest for its trees – it is also now threatening the survival of the Leadbeater’s Possum and increasing the risk of devastating wildfires like those we saw in 2009.  The old trees with hollows, and big dead trees (stags), that creatures like the Leadbeater’s Possum call home are fast disappearing.  The Leadbeaters are now dangerously close to the brink – just 1500 are thought left in the wild.
And, as old moist forests in South Eastern Australia, including the Central Highlands, are clear-felled, the replacement, regenerating forest is drier and more fire prone.  Wet forests are less fire prone, and rainforests – spattered along creek lines, gullys and rivers – can dampen and even block the spread of wildfires.
The 2009 fires destroyed 42% percent of the Leadbeater’s Possum habitat. None have been found in post-fire forests. These fires increased the pressure on the areas that escaped the burn, like the forests around Toolangi and Warburton. Now absolutely critical to the Leadbeaters, the loggers are also determined to get at them. Shockingly, despite the impacts of the 2009 fires, logging quotas were not reduced. So, the same amount of wood is being squeezed out of a much smaller area, or salvage logged from a forest desperately trying to recover from a devastating wildfire.
Salvage logging is risky-business. It can push a fragile ecosystem over the limit, past the point of recovery.  Intensive logging coupled with the resultant increases in wildfire causes what has been termed a “landscape-trap”. Mountain Ash become stuck in a feedback loop that eventually leads to their complete replacement by the fire-loving Acacia. The forest (and the timber) is lost forever.
The Central Highlands are also the most carbon-dense forests on earth and supply Melbourne’s world-class drinking water. Logging releases vast amounts of carbon locked up in these forests back into the atmosphere, contributing to climate change.  Logging also reduces water yields, as young, fast growing forests use up more water than the older, slower growing forests they replace.
If logging is causing so many problems, then surely it must be making a mint to justify its existence, right? Wrong. Amazingly, VicForests, the state-owned company that logs across Victoria’s east, has consistently failed to return a profit to the people (these native forests are, of course, public-owned assets). Shockingly, taxpayers are actually subsidising this industry. It runs at a loss. Logging in Victoria’s public-owned native forests employs just 2090 people across the entire State and about half that in the Central Highlands, including management, loggers, truck drivers and sawmill workers. Around another 2000 are employed in secondary processing around the state. By comparison, Abbott has promised to cut 12,000 positions from the Australian public service.
So why is it continuing?  A handful of big woodchip companies are making a mint, at our expense.  Nippon Paper, who own Australian Paper – the manufacturers of Reflex – being the main culprit.  Reflex paper is made at the Maryvale Mill, just south of the Central Highlands forests, and fed with trees clear-felled in the Central Highlands.
Want to stop logging in Victoria’s Central Highlands? The first thing you can do is get your workplace, university or school to stop buying Reflex.  There are lots of great 100% post-consumer recycled alternatives.
The second thing you can do is not believe the hype! The Victorian Government, logging industry lobby groups and a few naysayers will have you believe that VicForests properly manages its environmental impacts. This is not true. VicForests has been taken to Court repeatedly, both by environment groups and the Government’s own regulator, for breaches of the (drastically insufficient) environmental protections that currently exist. VicForests and the current State Government say they just need to do some more research to figure out what the problem is and how to fix it.  So they have set up a new committee to come up with another report.
We know what the problem is and the solution is clear.  The Leadbeater’s Possum is now one of the best-studied animals on earth. The best scientists, who have been studying these forests and advising the Government for more than 30 years, have clearly spelled out what needs to be done (and here and in detail including maps here).  It involves increasing reserves and changing logging practices in forests that remain open to logging.  We do not need any more research. We need action, fast.
Headline photo by by Takver.