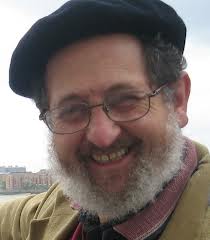 Rabbi Yehiel Grenimann (ex Melbourne High and Monash Univ–and thus a  personal connection with many people–) has lived in Israel for about 40 years new.  A conservative rabbi (for those who don’t know, a ‘middle of the road’ denomination), he works for Rabbis for Human Rights in  Occupied Territories. To  quote their website, “Rabbis for Human Rights is the only rabbinic voice of conscience in Israel, defending human rights of marginalized communities within Israel and the Palestinian Territories.   The organization was founded in 1988, and today has over 100 members-all Israelis and all ordained Orthodox, Reform, Conservative, Reconstructionist, and Renewal rabbis as well as some rabbinical students.”  See RfHR
Yehiel and his wife Debbie talked about many things over coffee including the use of the a-word (apartheid), the growth of the nationalist rights, the BDS movement, and the silencing of diverse opinion, whether in the US, Israel or Australia.  Yehiel works with many Palestinians and has been arrested at the Sheikh Jarrah protests.  They also spoke about their commitment to a progressive form of Zionism, but at the same time, equality.  It is important for Jews and supporters of Palestinian rights to understand the position by people with such a strong religious and human rights commitment.  I hope that their views can become more widely known and shared in Australia, even though not all on the left with agree with the position they take on Israel, democracy, and the ‘state’ issue.  Remember, they have a spiritual commitment rather than just a political case and I think the way they express attachment to ‘the land’ cannot be lightly dismissed through polemic such as ‘Judaism is not Zionism’.  Religious cultural identity–and managing it–is a much more complex thing.
This audio is an hour long, but worth bearing with. The hard questions start at about the 30 minute mark.