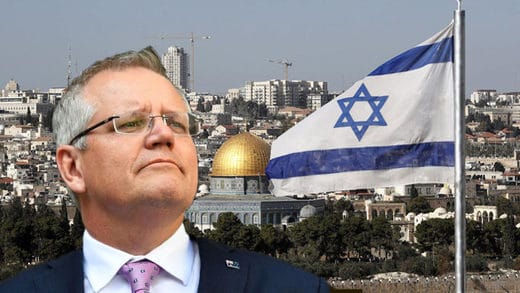 The Jerusalem Prize for 2019 has been awarded to Scott Morrison, according to reports in the Australian Jewish News and J-Wire. Making the announcement, the President of the Zionist Federation of Australia (ZFA), Jeremy Leibler, reportedly said that “The Jerusalem Prize acknowledges the genuine friendship and support of the Prime Minister and his Government for the Australian Jewish community and for Israel.” The award is being given by the ZFA, together with the Zionist Council of NSW and the World Zionist Organisation, and it is to be presented in Sydney on November 21.
This is a sickening display of sycophancy. These organisations have chosen to present an award indicating “friendship” with our Australian Jewish community to a Prime Minister who has gone out of his way to foster an Australian society based on social and ethnic division. His government enables a society which is hostile to migrant communities, is openly racist (even to the point of parody), and repeatedly attacks already marginalised groups.
By copying a page from Trump’s book, Morrison has now taken us closer to his particular style of nationalist jargon that ultimately legitimises antisemites and antisemitism, as part of a general climate of opposition to diversity and difference.
We are seeing the visible signs of antisemitism more and more on our streets: reports of swastikas daubed on buildings has become a regular affair in Melbourne. Racists and antisemites are becoming increasingly emboldened under this government, which seeks to benefit from racial division in order to harden Australia’s borders, exclude refugees, target African migrants through fabricated allegations of ‘African gang crime’, and continue forms of colonial violence which disproportionately affect Aboriginal people, including leading to ongoing deaths in custody and the continued removal of Aboriginal children from their families.
And Jewish people are being attacked on a number of fronts, because, of course, Jewish people are not only Jewish, we are also targeted and made vulnerable in other ways that the Coalition government frequently seeks to penalise through the reduction of social support. Some of us are migrants, refugees, disabled, poor, sick, on Centrelink (whether Newstart or ParentsNext or the Cashless Debit Card or the Pension or the Disability Pension, or any other punitive scheme), Aboriginal, women, queer, trans, workers, unionists, and facing the climate emergency. Collectively, we face high levels of violence, marginalisation, and precarity. Through his words and actions, Morrison has repeatedly made clear that he is not a friend to many people in Australia.
During the 2018 Wentworth by-election, Morrison chose to play antisemitic and anti-Palestinian games with his policy approach to Israel, promising voters that he would move the Australian embassy in Israel to Jerusalem. It seemed that Morrison believed that this could help buy the votes of Jews in the electorate, a deeply offensive insinuation. The ZFA though seemingly rewards Morrison, acting as though support for the right-wing and corrupt Netanyahu Government is evidence of a ‘friendship’ with Israel and with Jews, rather than part of a global entrenchment of hard right, conservative, and fascist political forces.
Indeed, in the Australian context, only 69% of Australian Jews identify as Zionist. And many are seriously concerned about the current direction of Israeli government policies that seem to be moving further and further away from any type of recognition of Palestinian rights. This is a recipe for ongoing conflict that will advantage no-one.
The Australian Jewish Democratic Society is clear that we are not interested in playing the role of model minority that the ZFA and its associates seem to want for themselves. We are clear that Morrison is no friend to the Jewish community here, nor to the best interests of Israel. While – based on their prior actions and words – we hold low expectations of the ZFA, their decision should be held to the scrutiny of Jews in Australia: it is evident that this award benefits a narrow political agenda, rather than expressing the voices of Australian Jews. Collectively we should make clear: Morrison and his government are not our friends.