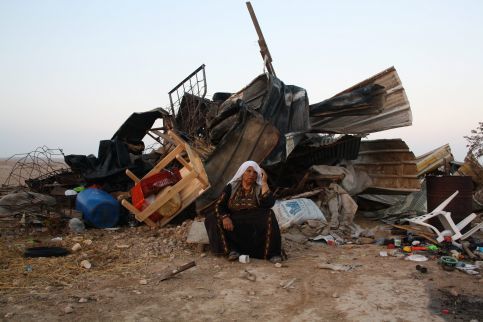 by George Stein
I visited a family friend while in Palestine on my current visit. She is part of a group called ‘ayalim,’ which aims to encourage students studying in Ben Gurion University in the Negev to consider permanent settlement in the area, to increase the population of Jews in the desert.
Ayalim considers itself ‘a new kind of pioneer. A new brand of activism. A new model for Israel.’ It believes that “bringing students to settle in the Negev and the Galilee is a national undertaking of supreme importance.” In order to provide incentives for this, the association grants “scholarships and subsidized housing to encourage students to settle in such areas.” However, this is not a new kind of pioneer, a new brand of activism or a new model for Israel. It claims that ‘today, we are closer than ever to Ben Gurion’s vision.” On the 5th of October 1937, in a letter to his son, Ben Gurion wrote that the “Negev land is reserved for Jewish citizens, whenever and wherever they want….We must expel Arabs and take their places…and if we have to use force, then we have force at our disposal”. Dr Awad Abu Freh, from the Bedouin village Al-Araqib told me that in 1948/1949 Jewish militia groups came into his village and killed twenty-one people, trying to scare them into leaving their land.
I stayed in one of the student villages in which Dani worked for two nights. I noticed that it is under rapid construction, with new buildings springing up everywhere, including a new Jewish National Fund (JNF) community centre. I also noticed a few nice parks, where sprinklers sprayed water onto green grass, pulsating to a silent beat. The next day, I visited Dr Awad Abu Freh, from the Bedouin village al-Araqib, where he told me about Israeli policies of discrimination towards his community, restrictions of water and a plan to displace these people from their homes. I wrote Dani a letter, not knowing how else to express my thoughts.
Letter to Dani:
Dear Dani,
Thanks again for having me in your home; it was so lovely to see you. I just wanted to email you about a few things we started to discuss. I would really love to get your feedback on some things. I came to Tel Aviv last year, wanting to travel in Israel without going on a program with a rigid structure and rules (like March of the Living and Academy), but also because I had started to learn about the history of the Israel/Palestine conflict and wanted to see what it was like for myself. My perspective was: the situation is really complicated and there is violence on both sides, but peace requires both sides to agree on coming together; for both Palestinians and Israelis to work together to stop the violence.
A friend of mine told me she had been to the Jordan Valley, which is in the West Bank and technically occupied territory, according to international law. But it is in Area C, which means that it is under full Israeli control. Going to the Jordan Valley changed everything for me. I stayed for about a month, visited many Palestinian villages and spoke to local families. The policies of the Israeli government in this area shocked me. These villages have been here for generations, well before the establishment of the state of Israel. Palestinians have farmed their land, picking dates and grapes and vegetables and would sell them at the market. There is plenty of water in this area and springs in many Palestinian villages, but this water is restricted to Palestinians. Wells are enclosed in barbed wire fences and are only available to Jewish settlements, like Tomer, Ro’I and Maskiyot. Israel has drilled deep wells which service Israeli settlements only. Because Israel forbids Palestinians to drill to a certain depth, they dry out the wells. Less than 10,000 settlers in the Jordan Valley use “one-quarter the total amount of water consumed by the entire Palestinian population of the West Bank, some 2.5 million people.” Palestinian farmers have to travel huge distances to buy water from Jewish settlements or from the Israeli water company Mekorot. Settlers are given unlimited water and 75% discount on electricity, while many Palestinians have no electricity in these areas.
In addition to this, most Palestinian villages are under demolition order and are considered illegal by Israel, even though these communities have been here for generations. Most housing for these communities consists of metal poles with an aluminum or canvas sheet serving as the roof. In the harsh climate of the Jordan Valley, these structures offer no protection from the heat or cold (at night in winter). If these communities try to build more suitable homes (or schools or health centres), they will be demolished. Routinely, the army comes (usually in the morning) and demolishes homes and animal pens. Local Palestinians do not want to leave their land, and have nowhere to go, so sometimes these poor families will rebuild their homes over and over again, and live in constant fear of them being demolished (there is more information at jordanvalleysolidarity.org- this is the group I am with).

The reason I bring this up, is because similar things are happening in the Negev with the Bedouin communities. This is under the rationale of ‘making the dessert bloom.’ After I saw you, I went to visit the Bedouin village of Al Araqib. I thought I’d share with you some information that I learnt from speaking with villagers from there, as well as Israeli volunteers who have been working with this community for years. Al Araqib is located just off route 40 along the highway from Beersheva. According to Israel authorities, the village is unrecognized and illegal, as it was declared state property in 1954. Before the establishment of the state of Israel, there were about 65,000 to 90,000 Bedouin living in the Negev. Ninety percent of them were expelled from their homes. Ben Gurion claimed the Negev was empty, and suitable for immediate Jewish settlement. The next demolition was in 2010, by the Israel Land Authority to prepare the land for a JNF forest. Since 2010, the village has been demolished forty two times. In September 2011, the government released the Prawer report, which proposed the transfer of 70,000 Bedouin from unrecognised villages into seven recognised villages in the area, without any consultation with the communities involved.
I wrote something about my visit with a man I made contact with, Dr Awad Abu Freih and thought I’d send some to you:

I met with Dr Awad Abu Freih from Al-Araqib, a chemistry professor. He told me that there are big projects to develop the Negev. “For us,” he says “development of the Negev means destroying our homes. There’s the JNF and they fight us and are against us like we are enemies. They want to push us into cities, but we want to stay in our villages.” He tells me that life in the villages is very hard. Farmers must buy water from a nearby Jewish village and must pay two shekel for one cubic meter of water. Then, they must pay a lot of money to transport the water back to their villages. In the past, Bedouin people have been restricted to water access from some villages, but this was met with fierce resistance, with villagers threatening to break the water pipes if they were not given access to the water. So the only reason they have access to water is due to placing huge amounts of pressure on the government. “All the time they give water to the kibbutz and moshav but not the Bedouin who lives near them.”
Now, Dr Awad is in the process of bringing his claim of ownership over the land, to court. He has spent 100,000 dollars on legal fees alone. JNF is supposed to cease its activities until a decision by the court is made, but they have persisted in making the land into a forest. “The judge says if you win, we will give you the land like it was before. But How? They are liars. No one can make the land like before.”

Aziz is the leader of the committee of Al-Araqib. We sit and drink coffee in a tent-like structure in Al-Araqib and he tells me his story. He was born in 1974 in Al-Araqib and has continued his life here. He has six children. His story is briefly interrupted early on, by someone telling us that a nearby village is being demolished. I ask if they will come here. “We cannot know when they will destroy. All of our houses are unrecognised by the law. They can come anytime and destroy.”
Aziz tells me the first demolition was in 1948. His grandfather and father were amongst those who rebuilt the village, and now today he is doing the same. The villagers made everything green. They made oil from olive trees, produced wheat from the land and used sheep for cheese. “Before the second demolition [in 2010] we had 4,500 olive trees.  We had 65 new houses, modern houses, fig trees, grape trees, orange trees in every garden. It was nice looking green and we eat this fruit. There were 573 people man woman children living here, but I am so sorry to say it our government decided to kill our life. They did not kill us but they kill our life.” From 2010 until now, Israeli Forces alongside the JNF have destroyed the village 42 times. This equates to 2 times a month. After demolishing the village, the government fines the people two million shekels to pay for the costs of demolition. So after forty-two demolitions, the people are expected to pay huge amounts of money. Paying for the bulldozers and soldiers who displace people of their homes.
At the same time as destroying these homes, the government is allowing new settlements to be built in the area. The JNF plants forests become state land and then these forests are cut down to make room for Jewish settlements.
Message from Al-Araqib to the world from the Sheihk of the village:
“I ask you and your groups to tell people what’s happening in the Negev.” People think that the JNF is making the Negev green, but they are destroying the Negev. Every Jewish person has the option of continuing life where they want. But Arabs are forced to live in villages. “We ask people to open their eyes.”
Before I go, Aziz tells me: Samud in Arabic means ‘stay on your land.’ We want everyone to know the word ‘samud,’ to stay on your land against the government, against the JNF.
Dani, this is relevant to you because the government is coordinating this displacement of Bedouins from the Negev at the same time as it is subsidizing and funding students to go to places like the one in which you work, in order to decrease the Bedouin presence while simultaneously increasing the Jewish presence in this area. If you get a chance, you should visit Al-Araqib. There are so many groups working there, like Negev Committee for Coexistence, Rabbis for Human Rights, etc. Even if you don’t believe what I am writing, I invite you: come to the Jordan Valley, come see this village. The world is becoming more aware of what is going on in Israel- government policies which use Judaism to enforce policies which cause all those who are not Jewish to suffer. For me, Judaism is too important to allow this to happen. The Palestinians do not see Jews as the enemy. They see those who deprive them of water, of work, of freedom of movement, of schools as the enemy. People are living under an unequal, military occupation which is causing them to suffer hugely. I only realised this when I saw it with my own eyes.
Love, George
http://www.jordanvalleysolidarity.org/
http://www.dukium.org/eng/-
http://rhr.org.il/eng/index.php/tag/al-araqib/- Rabbis for Human Rights