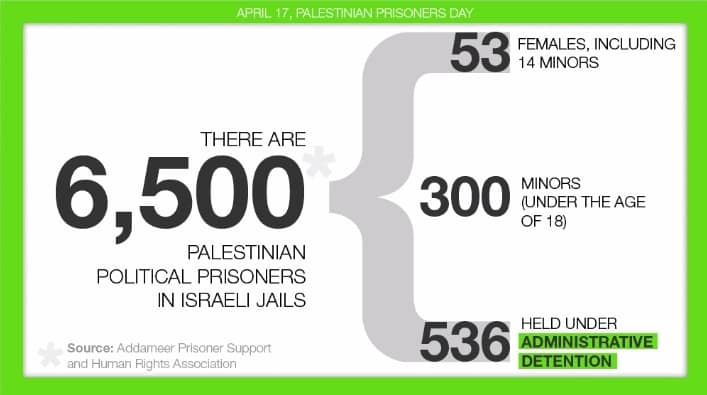 On April 17, Palestinian prisoners in Israel launched a hunger strike in protest of the conditions under which they were held. The strike was ended after 40 days, when the Israeli government offered a partial agreement to their terms. The following statement was issued in solidarity with what came to be known as the Dignity Strike, and circulated social networks from 4 May 2017 onward, gathering more signatories:

Tonight, on the 34th day of the hunger strike we stand in solidarity with the approximately 1500 Palestinian prisoners who launched a hunger strike on April 17, and who remain on hunger strike, protesting their treatment by Israel within Israeli prisons.
The prisoners are striking in order to support their demands, which are basic human rights: the ability to have family visits, phone calls, photographs with family, and proper medical care, the end to torture – whether from being beaten, facing sleep deprivation, extended periods in solitary confinement, or any other measure – the end to administrative detention and the routine jailing of Palestinians without charge, trial, or proper access to lawyers.
According to Addameer, there are currently 6300 Palestinian political prisoners, which includes 500 administrative detainees, 300 child prisoners and 56 female prisoners. Palestinians around Gaza, the West Bank and elsewhere have rallied in support.
The imprisonment of Palestinians is being used as a tool by Israel in order to attempt to quash resistance, and criminalise Palestinian life. Indeed, Marwan Barghouti – a leader of the strike – has been placed in solitary confinement as a result of his leadership. In an op-ed in the New York TimesBarghouti wrote “Decades of experience have proved that Israel’s inhumane system of colonial and military occupation aims to break the spirit of prisoners and the nation to which they belong, by inflicting suffering on their bodies, separating them from their families and communities, using humiliating measures to compel subjugation. In spite of such treatment, we will not surrender to it.”
As Palestinians repeatedly make clear, there can be no peace without justice for all. This hunger strike is a vital act of nonviolent resistance, which reminds us all of what is at stake. We stand alongside Palestinians in calling for their fundamental human rights to be embraced by the Israeli government. In this year which marks 100 years since the Balfour Declaration, 70 years since the Nakba and 50 years since the Naksa, we encourage everyone to find ways to support Palestinian claims for justice and self-determination.
In solidarity.