No plan B for the Middle East – Foreign Minister Bob Carr 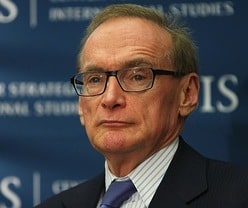 Opinion piece by Australia’s Foreign Minister Bob Carr that appears in The Australian newspaper (July 3, 2013).
THERE is a scene in The West Wing where the US president’s advisers caution him about launching another bid for Middle East peace.
Toby Ziegler says to President Jed Bartlet: “The road to the Nobel Prize is the road to noble failure.”
This bit of cautionary wisdom reflects the disappointment of Bill Clinton in the last hours of his administration in January 2001 as he begged Yasser Arafat to agree to a US peace plan and the creation of a Palestinian state.
The 2003 Geneva Accord, negotiated over two years by former representatives of the Israeli and Palestinian governments, confirmed the well-known outlines of a deal. So did the Arab Peace Initiative, first proposed in 2002, the key Arab proposal for ending the conflict.
Before we despair, we should remember the success of Jimmy Carter in brokering the Camp David Accords, which led to the 1979 Egypt-Israel Peace Treaty. This treaty still stands. Egyptian president Anwar Sadat and Israeli prime minister Menachem Begin took significant risks in bringing it to fruition, and shared the 1978 Nobel Peace Prize for their efforts.
There is a consensus that the present deadlock between Israelis and Palestinians will continue without American leadership. Australia shares this view and earlier this year shared it alongside British Foreign Secretary William Hague, said this – most recently earlier this year with William Hague – who asked Australia to join him in calling for US leadership.
Since then US Secretary of State John Kerry has visited Israel and the Palestinian territories five times to lay the groundwork for a resumption of negotiations.
The lineaments of the ultimate peace treaty are well known, summed up by President Barack Obama during his March visit to Israel: “Two states for two people”. There is an international consensus that the starting point should be the 1967 borders. These should be subject to agreed land swaps.
A solution should lead to a viable Palestinian state subject to comprehensive guarantees for Israeli security and a sharing of Jerusalem.
Henry Kissinger told me that years back on a visit to Jerusalem he dined with Arafat and they talked about how close was the resolution of these so-called final status issues. Focusing on Jerusalem, Arafat offered to resolve things there and then. And to prove how viable a division of the city was, he sent a waiter out to get a street directory. Here is the paradox – we know the lineaments – but it is hard to get there. The Israelis are understandably focused on security. The Palestinians on the borders of their state.
Australian leaders can easily grasp the pressures both these leaderships face. But given our friendly relations with both sides, we are entitled to nudge forward this irrefutable proposition: there is no plan B. No alternative to 1967 borders with agreed land swaps and a Palestinian state with security guarantees for Israel.
Friends of Israel and friends of the Palestinians must acknowledge there is a weariness on both sides – among leaders as well as their electorates.
The flare-up in Gaza confirmed to many Israelis that in return for surrendering territory they face attacks. Palestinians point to the encroachment of Israeli settlements, confirmed by a recent Israeli newspaper report that described the “demographic surge” on the West Bank that has lifted the number of Israeli settlers from 190,000 to 385,000 in 10 years.
But there is no plan B.

To get to the inevitable settlement, Prime Minister Benjamin Netanyahu will need all his long experience and resilience. In forming his new government, he confirmed his commitment to a peaceful two-state solution by recruiting Tzipi Livni, Israel’s former foreign minister who campaigned on resuming the peace process.
Palestinian President Mahmoud Abbas, in his address to the UN General Assembly last November, reaffirmed the Palestinians were committed to negotiations, a commitment he has restated in support of Kerry’s efforts.
Both sides need to agree to direct negotiations without preconditions. But success will depend on each taking an important step. The Palestinians must abide by the terms of the Gaza ceasefire of last November and end all rocket attacks on southern Israel. Israel must stop creating new settlements in the Palestinian territories. The Gaza rocket attacks undermine the credibility of the Palestinians as a partner for peace. Settlement activity is illegal and undermines confidence in Israel’s intentions and good faith at the negotiating table. It creates “facts on the ground” that have the potential to threaten the viability of a future Palestinian state.
As a friend of Israel, I can say there is another fundamental issue at stake: the survival of Israel as a democracy. The durability of Israeli democracy requires the existence of a viable Palestinian state. Without it, Israel will be trapped, governing a burgeoning Arab population to which it cannot grant full and equal civil rights and remain a Jewish state.
I was pleased by Australia’s decision to abstain in the UN General Assembly on the vote to grant the Palestinian Authority UN observer status. Our abstention conveyed a message every bit as definitive as a yes or no vote. The message we sent, in the company of Britain, Germany and 38 other nations that abstained, is that the only durable basis for the resolution of this conflict is direct negotiations between Israel and the Palestinians.
I hope fervently that President Obama’s renewal of the peace process will ultimately lead to a constructive role for the UN, where Australia was the first country to record its vote for the UN partition plan that created the Israel 65 years ago. However, the path to Palestinian statehood does not lie through UN resolutions. Nor in pursuing membership of international organisations. As Obama said in Jerusalem in March: “Peace will have to be made among peoples, not just governments.” All members of the international community should unite behind Kerry’s efforts and work to encourage both the Israelis and the Palestinians to engage constructively.
None of us has seen a plan B.