Am I an activist? :: Sivan Barak 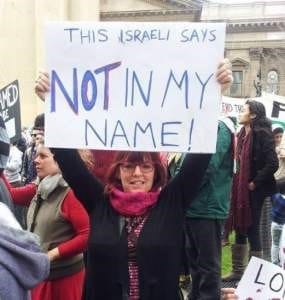 Sivan Barak is a social worker and member of the AJDS committee. Her chapter in beyond tribal loyalties. This is an excerpt from Sivan’s chapter in Beyond Tribal Loyalties.

A Palestinian friend recently responded to this question with the following:

”If I conduct in the shower, does that make me a maestro?”

My name is Sivan Barak, a sister, a mother, a daughter, a friend and in my humble opinion I may well be an activist but the question that is far more interesting to me is why I became one and this is still not clear to me.

My education both formal and informal has not been mainstream.  Learning to question everything has probably been the best lesson I have ever learnt but has also caused me and my family much turmoil.

Questioning is an incessant quality that has affected every aspect of my life. There have been many questions big and small but one that recurs in a multitude of scenarios; it is a complex one to ask, so I always place it within a story.

Let me ask you, the reader, my question and if you can share it with your friends and family.

Imagine two close friends driving along the beach road on a lovely spring afternoon, listening to music, seemingly without a care in the world. Suddenly a car swerves towards them, an accident occurs, the cars are destroyed yet they are untouched.

After the terrible sounds of glass shattering, smell of oil and burning rubber, the adrenaline rush subsides, the body stops shaking, then there is silence.

In these moments a shift could occur for the two involved in the incident, a deep shift in their perspective towards life.

Why is it that one friend may emerge from this traumatic event with a renewed attitude to life, seeing it as a precious gift to be cherished and relished? Perhaps even re­-evaluating their attitude towards what is most important and decide to live life fearlessly from now on, to take risks, ‘stop putting it off’ as they come to a realisation that life might end tomorrow?

Meanwhile the second friend could see it in a completely opposing light. They could cling to the fear and drama experienced at that moment of impact, seeing the near-death experience in a fatalistic way and from that day on live in perpetual victimhood.

What lies within our minds or hearts that lead us down two opposing paths?

Cross roads or turning points and the choices we make have always fascinated me. Is it the way we are wired, genetics, or our upbringing and family values?

On the surface my destiny as an activist was set before I had any political or social awareness, but the road taken and the path down the Yellow Brick Road, never lead me to the Emerald City and I am still not sure where home is.

To understand who Sivan Barak is and why I am in this book I need to tell my story which began in the United States in 1964, spanning across 3 continents and ending in Australia in 2011. To pinpoint the precise cross-road which morphed me into an activist I will trace my life junctions from both ends chronologically, taking a magnifying glass to significant moments which made me the woman I am today. To be honest until I was asked to write this chapter I never gave it a thought so in the process I’m hoping to locate the “car crash” that affected my inner moral compass so deeply that I became the person I am today.

I will alternate between past and present dates working slowly towards that one moment which is somewhere in the middle.

Flash back to Scene 1 Cedars of Sinai Hospital in Beverly Hills.

My mother was born in Palestine in 1943 to Jewish Polish parents who immigrated to Palestine in the early 30’s. My father was American born, the son of a Russian Jewish immigrant father and a 13th generation American born ex Mormon mother. Confused yet?

With this kind of start I was seemingly on an inevitable path of a life of activism or soul searching.

At birth I was bestowed with three citizenships, American, Israeli and Australian, thus began my wondering years in the quest of a sense of identity and a belonging to a place, a people, a tribe.

May 1st 1983  At 18 i was a full fledged lefty Zionist who believed my country needed me to continue ‘flowering the barren land’ that was founded by our forefathers in the1948 War of Independence. I was familiar with the history of 1967, the occupation, Palestinian identity but it was mostly equated with terror and fear, certainly it was without any question a Jewish Homeland and my home.

In 1984 I voluntarily enlisted into the Israeli army and served for 2 years and 10 months.  I remember one day during basic training I was at target practice and my target had an Arabic looking face drawn on it, cartoon style.  My stomach turned, and I told my officer I refuse to shoot at it asking for a replacement one.  He rolled his eyes and did it. During the 6 months duty I spent in the West bank I started to see the reality on the ground and more questions arose.  I noticed a 2-tiered society comprising of us and them, we rule, and they are second class citizens with little voice or rights. Clearly I still felt we had a purpose, to protect and defend the innocent from terror and hatred.  So I stayed on the path.

Dec 2008 – about a week into Operation Cast Lead in Gaza, I’ve decided to join the masses all alone, uncomfortably marching down the main street of our peaceful city besides very angry demonstrators, shouting slogans of fury against the killing of innocent lives in besieged Gaza.

30 minutes earlier another demonstration went down this same path, with many of my friends marching in support of the Israeli government. Now as I march I look around to see if anyone recognises me, I’m genuinely concerned to be labelled as an Israel hater or an enemy from within. Despite my fears I march as my heart tells me to do the right thing. Let my friends gaze in horror. “Palestine will be free, from the river to the sea!” the chanting made me cringe, but I marched on.

Southern Israel 1970 – My mother, younger brother and I immigrated to Israel and settled on a kibbutz neighbouring Gaza.   A socialist project in which I lived wonderful carefree days barefoot, free to roam, surrounded by nature and freedom. Hebrew became my mother tongue, Israel my Homeland and picking her wild flowers in spring time became a favourite pass time. My mother remarried a young Israeli kibutznik who worked in the fields and befriended several of the farmers from Gaza who worked across the fence. I recall we often hosted the Gazan’s and their families in our home and would drive down to share a magnificent meal at their home in Gaza. In my young mind I knew only of peaceful co-existence between “us’’ Jews and “them” Arabs, but then I was told very little of the narrative of the Palestinians.  There seemed to be many blanks and fuzzy anecdotes around our histories.

Following three years of peace came the Yom Kippur war. My new father was a paratrooper with a beautiful red beret and olive uniform and he soon left for the Suez Canal to fight the terrible enemy. I was told we were fighting the Arabs and that they wanted to kill us all. During those months the kibbutz was suddenly empty of men and run by the women who worked in the fields, milked the cows, fed the chickens and baked cakes for care packages to send t
o their brave fighting husbands, brothers, sons, fathers and friends. For me these days were exciting, there was no school and we spent many nights in the bomb shelters, eating chocolate and watching television. In those days kibbutz was truly a socialist project so T.V was not allowed in the members rooms only in communal spaces like the shelters and club room, this was for the sake of equality for all. When my dad returned for a rare visit he told us heroic tales of battles won, about a bicycle he found in one of the villages which he wanted to bring back for us, the awful food they ate and how little they slept.

Scene 6 Trades Hall- “What do you think of me”

July 2008 team building exercise in the big cold room six strangers standing awkwardly around sipping instant coffee and waiting for cameras to be set up so the workshop can begin. I’m feeling nervous and excited about this adventure, I love new experiences, and this looks promisingly different to anything I ever did before.

We were to stand up each pair at a time in the middle of the large room and face each other while the rest looked on. My partner and I were first to stand up, facing each other approximately 2 metres apart, hands by our sides, no facial expression, we were asked to stare into each other’s eyes and wait in silence. I could hear the film capturing the moment, I wriggled around uncomfortably giggling in nervousness, our eyes locked looking at each other but not yet seeing each other. I could feel my heart beating fast, resisting staring deeply into the eyes of a stranger, an enemy, who probably hates me and blames me for generations of his families suffering. But then I saw him, behind the conflict, the violence and the pain, beyond all that and for the first time in my life I saw the man opposite me. A human being like me, an equal, and the shift happened. It was a simple shift over in a second but with no going back.

My cross road was as simple as that, from the day I stared into the eyes of a Palestinian and saw the human I started to see and fight against the injustices my people had instigated against his people. A cloud lifted in me and those who watched us, it was palpable.  The path has at times been terrifying and ground shattering, but I will remain on it until peace and justice has been set in place in the land I love which is my home and his.